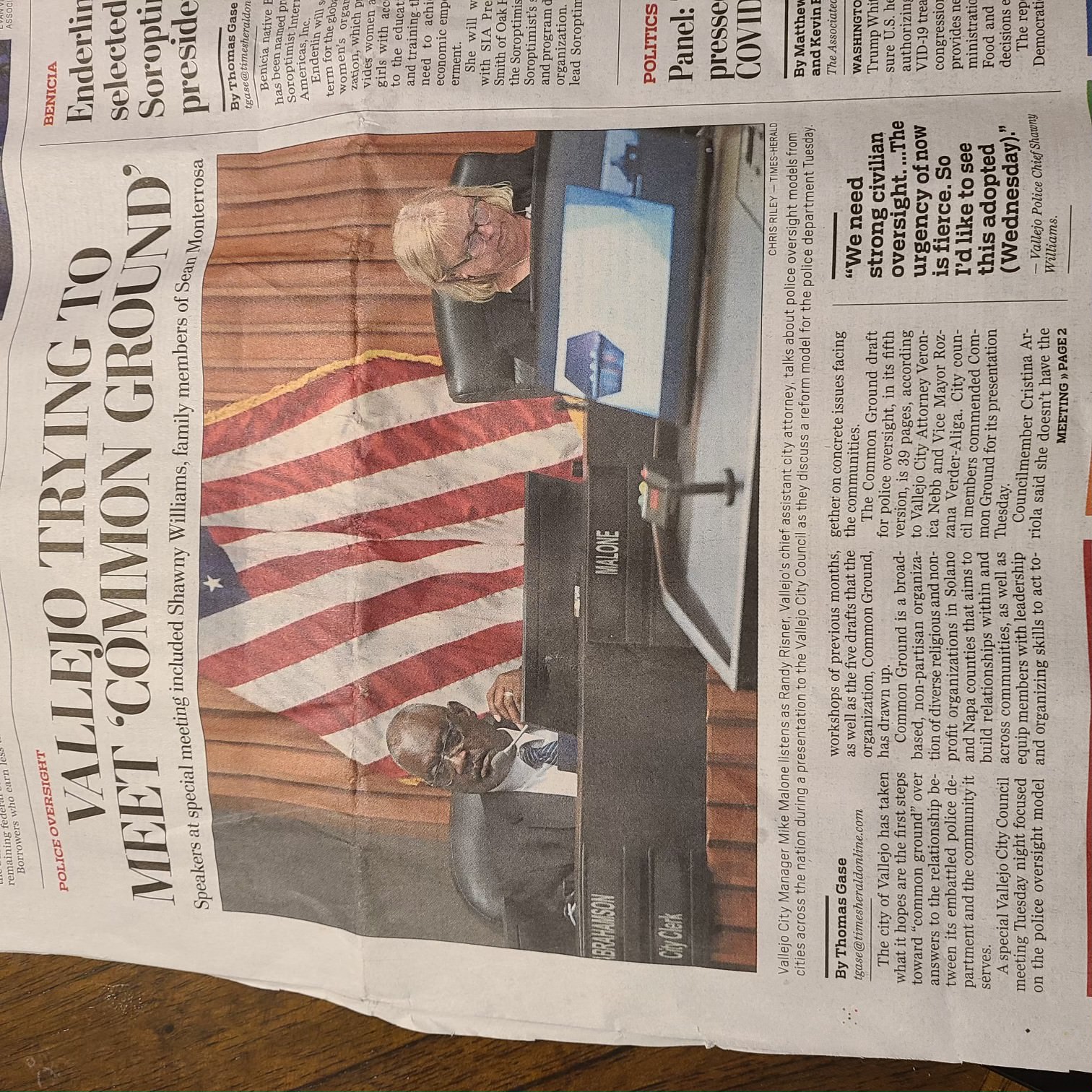 On August 23, 2022, Common Ground and the community gathered in City Hall to hear a report from City Staff on what kinds of Police Oversight models are used throughout the country. The City Council, community members, and Common Ground came out in force to support the Common Ground proposed model of Oversight.
The Civilian Oversight Model and Ordinance Common Ground developed addresses those issues and suggests these three components:

Common Ground has been advocating for a Civilian Oversight Ordinance in the city of Vallejo, CA since June 2020, after hearing the stories they heard of a desire for safer neighborhoods, and the need to restore trust between the city’s residents and the police.

The Public Safety Team met with subject matter experts from California to New Jersey, from Arizona to Nebraska and states in between. They spoke with their member institutions, the public, the Department of Justice, City Council members, impacted families, faith-based organizations, and Police Chief Williams. Everyone expressed the need for transparency and community involvement. In October 2020, Common Ground presented to the City Council their research regarding Police Oversight. They were then asked by former City Manager, Greg Nyhoff, and Vallejo City Council to return with a model that they felt would work specifically for the city of Vallejo.

Common Ground showed up to attend recent town hall meetings hosted by the city with the goal of getting the community’s perspective on a police oversight ordinance. Many individuals who were in attendance were confused and uneducated in the legal language, and thus did not know how to answer their survey. Our goal is to educate the community and help them understand how having a strong police oversight ordinance will strengthen the relationship between the police and the community and hold city officials and others accountable.

We took the time to develop an ordinance using information from subject matter experts and other local jurisdictions. We are in the fifth iteration of this ordinance which should tell you we are willing and able to work with the City Council, the Police Chief, the City Manager, and the City Attorney to make any needed changes; however, we continue to encounter roadblocks. We believe we have developed a strong ordinance that would benefit everyone. We believe this proposed ordinance is something that is desperately needed in Vallejo.

In November 2020, the City of Vallejo made national news due to the behavior of its police officers. The national spotlight is still on Vallejo, and it will not be “shut off” until there is a concerted effort on everyone’s part to make a change. A change that will remove the spotlight from Vallejo and show the nation that Vallejo constituents and the leaders at all levels are serious about change and want to tear down the barriers between the police and the community they serve. It’s time to move forward and Common Ground is ready.